skip to main | skip to sidebar

thanks so much to lisa and to all the participants of this challenge! it was so much fun! i finished nine books, although i was really going to try hard to finish a tenth before the end. i've posted a brief wrap-up here. see you all around the blogosphere!
Posted by alisonwonderland at 5:42 PM 2 comments:

Hi all!! I used a random number generator again to choose the final prize!!

It goes to Juli, which is fitting since she's done so many reviews in the past week!! Juli, if you can email me your snail mail address, I'll send you the prize!! (My email in comments).

I also used a random number generator to choose the book from the sidebar -- the book that it picked for the prize is The Poisonwood Bible, so that's what I'll send. If you already have that one/have already read it, let me know, Juli and I'll choose again.

Thanks everyone for a great challenge and I hope to see you here again next year!! Keep up with me on my regular book blog and I'll make announcements as it comes closer!

THE CHALLENGE HAS STARTED AND IS NOW CLOSED TO NEW PARTICIPANTS!!


Everyone has chosen their five books that represent them and is now busily reading away on the books they've chosen to read! I'm looking forward to all the discussions about books that have been chosen. I'm also working on a PDF file that you can print out that includes all the books on the sidebar so that you can continue reading after the challenge is over -- I know you want to read more of these books than you can fit in in the next 5 months!
Posted by Lisa at 11:25 AM 134 comments:

This was a great challenge, Lisa, and I hope you do it again next year. I ended up with 7 titles when I said I would do 5-6, so I consider it a success. Thanks so much!

I had a great time participating in this challenge. I read so many good reviews and added a lot of new books to my TBR pile.

My full wrap up is here.

Juli's Review: So Many Books, So Little Time

From the back cover:

In early 2002, Sara Nelson-editor, reporter, reviewer, mother, daughter, wife, and compulsive reader-set out to chronicle a year's worth of reading, to explore how the world of books and words intermingled with children, marriage, friends, and the rest of the real world. She had a system all set up: fifty-two weeks, fifty-two books . . . and it all fell apart the first week. That's when she discovered that books chose her as much as she chose them, and the rewards and frustrations they brought were nothing she could plan for: In reading, as in life, even if you know what you're doing, you really kind of don't.

I have to admit I did not think I would enjoy this book at all. Reading about someone else reading? It sounded boring to me. I also thought it started slowly and I almost put it down (Nelson actually talks about knowing you’re a grown up when you can put down a book unfinished because you don’t like it). Nelson really doesn’t summarize the plots of the books. She talks more about how they impacted her life or the impression they made or what they reminded her of. It was also interesting to hear her views about other people as readers.

What I Liked: Nelson reminded me of the memories books trigger in you. Where you were, a certain person, what you were doing at that point in your life. Some books you keep going back to like an old friend. She wasn’t afraid to be honest about the good and bad aspects of her life. There is an appendix that lists the books she was planning to read and the books she did actually read. I added several books to my to be read pile

What I Did Not Like: Nelson is a book snob. She seems like she wouldn’t be caught dead anywhere reading a Stephen King novel. She actually picked her books to take on a vacation based on how she thought she would look to the other women on the trip. She wanted to impress them. She considered (or did) ending friendships over bad book recommendations because of what they said about the person who recommended them.

I found this book on three lists: Sally, Vasilly and a.book.in.the.life. If I were to generalize and be kinda corny I would say they all have wayyyy more books to read than they have time for (well...who doesn't?). I would also guess they enjoy challenging themselves in various ways, not just those related to books. I also wondered if they had a hard times choosing their books like Nelson did. She was so picky!
Posted by Juli at 10:16 AM 1 comment: 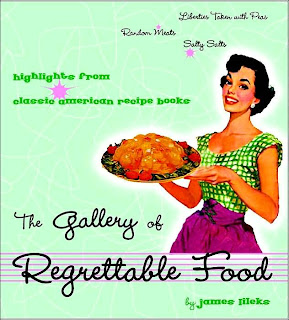 From the back cover:

WARNING: This is not a cookbook. You'll find no tongue-tempting treats within -- unless, of course, you consider Boiled Cow Elbow with Plaid Sauce to be your idea of a tasty meal. No, The Gallery of Regrettable Food is a public service. Learn to identify these dishes. Learn to regard shivering liver molds with suspicion. Learn why curries are a Communist plot to undermine decent, honest American spices. Learn to heed the advice of stern, fictional nutritionists. If you see any of these dishes, please alert the authorities.

Now, the good news: laboratory tests prove that The Gallery of Regrettable Food AMUSES as well as informs. Four out of five doctors recommend this book for its GENEROUS PORTIONS OF HILARITY and ghastly pictures from RETRO COOKBOOKS. You too will look at these products of post-war cuisine and ask: "WHAT WERE THEY THINKING?" It's an affectionate look at the days when starch ruled, pepper was a dangerous spice, and Stuffed Meat with Meat Sauce was considered health food. 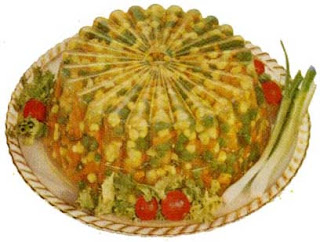 I thought this book was absolutely fantastic based mainly upon it's uniqueness. Basically Lileks makes fun of recipes he has found dating from the 50's to the 70's. It had incredible photos of the dishes, retro fonts and colors, and a cool layout. I laughed out loud several times. He shows pictures of each dish and then "talks" about that dish. Most of the dishes are just plain disgusting. There were two chapters near the end that dragged a little but besides that it was a very fast read. I plan on keeping it on my coffee table so people can grab it for a good laugh.

Ladies, serve toast--and well-groomed twins in tuxedos will want to have sex with you!

Perhaps that circle is not a cross section of a spine, but a blowhole (ahem) of sorts--of a false eye to confuse predators. Put it on the floor and watch it frighten the dog.

This looks very much like a magnified cluster of warts. Although warts don't usually come with parsely.

I don't know, and I don't want to know. I just don't. It's a cucumber fun house, perhaps: notice how they seem to be pressing against the sides of the mold as if demanding our attention. Help! We're being felt up by smelly salmon in here --let us out 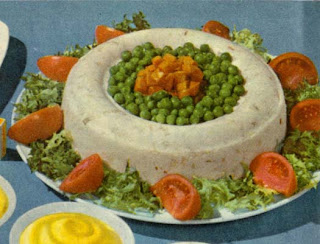 James Lileks has a website "The Official Institute of Good Cheer" on which the Gallery of Regrettable Food is based.

I picked this books from Tiny Librian's list and I would have to say she has a great, quirkcy sense of humor!
Posted by Juli at 7:25 PM 2 comments:

Hosted by Lisa at breakingfourth.blogspot.com

BOOKS TO CHOOSE FROM